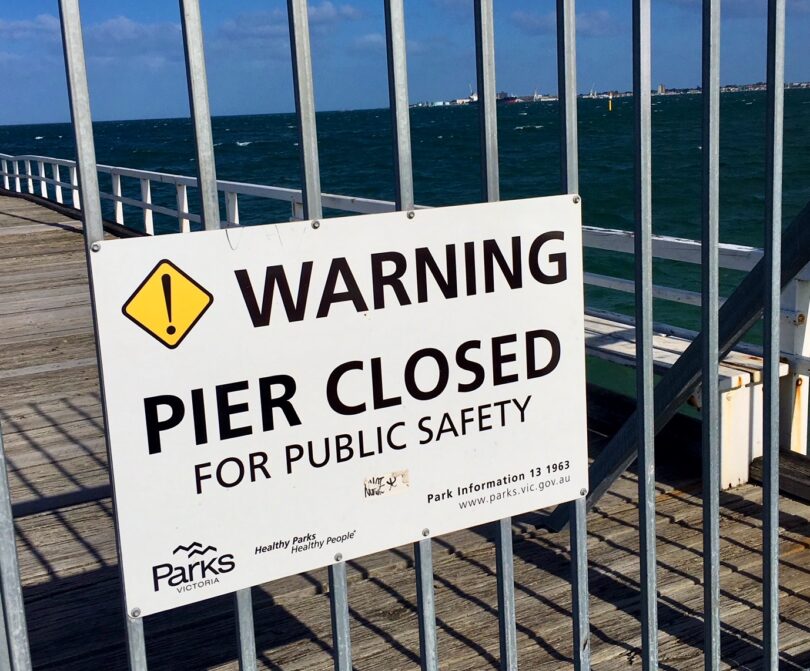 Tired of Australian politics and the air it occupies, I pull a coat around my shoulders and flee the unrelenting loop of news and social media.

I feel the need for nature. For sand and sea. For light and warmth. For something I can trust.

I take a walk in the open air, from St Kilda to South Melbourne, where a line of beach meets the bay like a pair of outstretched arms.

I walk to steady the ship of self and to rid myself of nonsense. I find my equilibrium in the soft, September sun.

There is a pier I like to walk along but the pier is closed and sealed away, behind a metal fence.

Kerferd Road Pier, South Melbourne, has taken its place in Port Phillip Bay since 1889. I regard the pier as a living thing: an Elder in the landscape; an immense and stoic being of singular integrity.

It stands alone, from year to year, and weathers every storm. It creaks and sighs in winter, when the wind is up and howling. It holds the heat of summer in its broad and splintered beams.

Time and tide have done their worst to the vertical pylons beneath the pier. Parts of the structure lean and dip in ways they never did. The pier is closed for public safety.

I telephone Parks Victoria for an update on repairs. They put me through to a bloke named Neil. He is down-to-earth and well-informed.

The pier still has future, though there is much work to be done. The restoration of its heritage structure cannot be rushed or compromised. The job will be put to public tender and the pier restored to its former self.

“We’ll get it right,” says Neil, who speaks with the calm authority of a sympathetic doctor.

A reassuring image occupies my mind. I picture the team of men and women who will work on the pier, from week to week, and lend to its restoration their expertise and care.

I feel the urge to thank them.

Out on the bay there is nothing but light and the shimmering play of water.