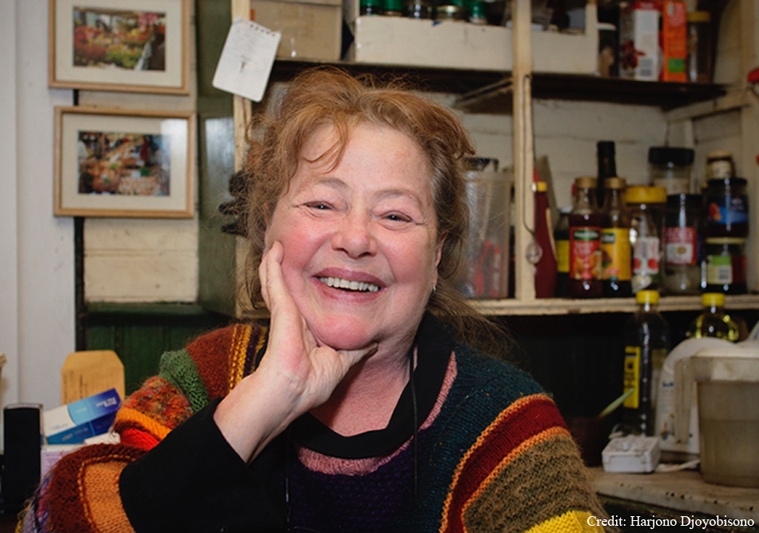 I wrote a series of articles in 2014-15 for a legal education website. My column profiled some of the many writers and artists who also have a law degree – including author, Kerry Greenwood.

Kerry Greenwood was born and raised in the Melbourne suburb of Footscray. When she was 14, some of her classmates stole a car and were subsequently charged by police.

The parents of the children couldn’t afford to hire lawyers. The children appeared in court without adequate legal representation, and adverse findings were made against them.

Greenwood (pictured) still bristles at the memory of it. “It’s rare to have such a strong crusading impulse at such an early age, but I remember being outraged at my classmates’ predicament. There was no support for them. Nothing.”

Greenwood decided there and then that she would become a lawyer. More than that, a lawyer for the west and its largely working-class population.

“I felt that no one in power represented Melbourne’s west: the Labor party didn’t need to; and the Liberal party didn’t want to.”

She made her way through school and commenced a Law/Arts degree at the University of Melbourne in 1972.

The law school had an in-take that year of approximately 200 students: only nine of them were female; and Greenwood’s unsure if anyone was from the west.

In her first week at university, a male student from a prestigious private school asked her with a sneer, “What are you doing here?”

Even Greenwood had her doubts. “I felt completely isolated to begin with – alien, weird.”

Her first lecturer was kind and engaging, and Greenwood found the course work as interesting as it was demanding.

“For the first six months, they put my head through the ringer; took reality and gave it a half-turn sideways,” she says.

“Some days I felt like my brain was completely full – but I never forgot that laws apply to people, that the law poses philosophical and not just intellectual problems.”

Greenwood graduated, completed her articles and thereafter – and for the next two decades – went to work for Legal Aid, wanting only “to be useful”.

Greenwood appeared on behalf of countless people in the Sunshine Magistrates Court. She thinks she might still hold the record for the most clients at that court in a single day: 21.

Many of her clients were young and troubled men. “My job was to get them safely through that period,” she says.

She often went home exhausted. Some nights, she would run a bath and lie in the tub reflecting on her day.

She would ask herself whether, on balance, she had made a difference. “Justice for all was never possible. A good day was justice for most.”

Or she would write. In her fiction, Greenwood was building herself a second and increasingly successful literary life.

In 1989 she published Cocaine Blues, the first of 20 novels to date in the immensely successful ‘Phryne Fisher’ series. In 2012, the novels were adapted for ABC television.

Greenwood says that she wrote to escape reality: to make whole and complete in fiction that which could not be made neat or final in her day-to-day work.

As her writing took off, she reduced her days at Legal Aid from five to four, then three, then two, then one. In June 2010, she retired from Legal Aid and now writes full-time.

She misses the law. She misses the daily rough and tumble of a suburban Magistrates Court. She tells would-be writers that a link to the working world is a valuable thing: that it will keep them grounded.

“It is not necessary for writers to write about their reality, but they must in some way remain connected to reality.”

Greenwood’s list of literary achievements is long and lustrous. But on reflection, it is her work in the law of which she is most proud: “So many of my clients were young and vulnerable. They needed help, and I was there.”

It is a statement made without fuss or pretence – but a statement, nonetheless, that Greenwood delivers with deep and obvious feeling.