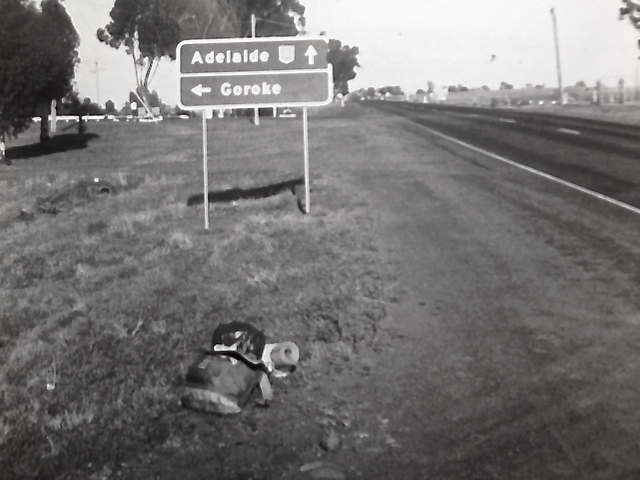 Twenty-seven years ago, two teenagers were found stabbed to death at a truck parking bay near the border of South Australia and Victoria.

Fiona Burns, 15, from Melbourne, and John Lee, 14, from South Australia, were last seen hitchhiking along the Western Highway between 9 and 11 October 1990.

In October 2011, Victoria Police announced that detectives are sifting through a mountain of information after a public appeal to help solve the double murder.

This was the first I had heard of the murders and the news was especially sobering. Why? Because in 1990, I regularly hitched between Melbourne and Adelaide.

I would catch a train from the centre of Melbourne to a place where the rails meet the Western Highway.

I’d find a spot on the muddy edge of the road and there, with my backpack at my feet and the word ‘Adelaide’ scrawled on a bit of cardboard, I would put out my thumb.

Sometimes I made it to Adelaide with a single, happy ride. Sometimes it took a series of rides that prolonged the journey but increased the sense of adventure.

Only once I was caught between the two cities: I camped that night in a park in the town of Nhill, western Victoria.

I never had any trouble. I never encountered anyone whose behaviour I would classify as aggressive, suspicious or devious. My rides were good. My companions warm and welcoming.

Most rides I’ve forgotten, but I do remember a man from Dimboola, Victoria, with chickens in his car – live ones, uncaged. They pecked at my neck and crapped in my lap.

I remember a woman from outside Ballarat with sympathetic eyes and a collection of terribly sad stories, each told without fuss or pretension. As I left her car, she thanked me for the ride. Thanked me.

And I remember a Christian Brother on his way to a church in Victoria’s Western District. He told me that, as he grew older, the idea of God seemed ever less real, but his sense of God ever clearer.

Somewhere near Stawell, the sun hit the road and sparkled with a dazzling brilliance. “Like that,” he said.

More often than not, the people who offered me rides were former hitchhikers themselves. They picked me up out of solidarity.

Over the years I came to believe that I had earned my membership to a novel and largely secret club: the league of men, and sometimes women, who crisscross the country at the grace of others.

I loved it: those moments of fellowship in a stranger’s car when a genuine connection was made; the heightened sense of life as a journey when the ride came to an end.

I hitchhiked Australia in the summer of 1989-1990, thumbing rides from Melbourne to Darwin, from Tenant Creek to Cape York, and south again down the east coast. It took me four months and taught me more about the country than anything since.

But yes, I was lucky. I returned home without incident, inspired and enriched.

At the public appeal in 2011, Fiona Burns’ mother told a press conference that her daughter was a child, who just wanted to go out into the “big, bad world and she was not ready for it”.

The murders were tragic proof that the dangers of hitchhiking are horribly real. One can only hope, for the sake of those left grieving, that the killer or killers are brought to justice.

The murders were also depressing in one other small sense.

I still have faith in the essential goodness of almost everyone I meet, and am willing – more or less – to take people as I find them. For this, I have been rewarded a thousand times over. It has given me something solid and real.

I arrived at this belief, in no small measure, thanks to my experience of hitchhiking. The news of the murders cast an awfully long shadow over memories that are largely bright, and over insights that have lasted years.

I rarely hitchhike anymore, nor would I tell a young person that it is the only way to see the world.

What I would say is that there is goodness in the world – lots of it – and much of it resides in people.

I would tell a young person to trust in that goodness: to search for it and share it where they can.

First published in The Big Issue, Jan 2012 (dates and years updated for 2017)
Pictured: My tiny backpack by the edge of the road, near Horsham, Victoria, 1990