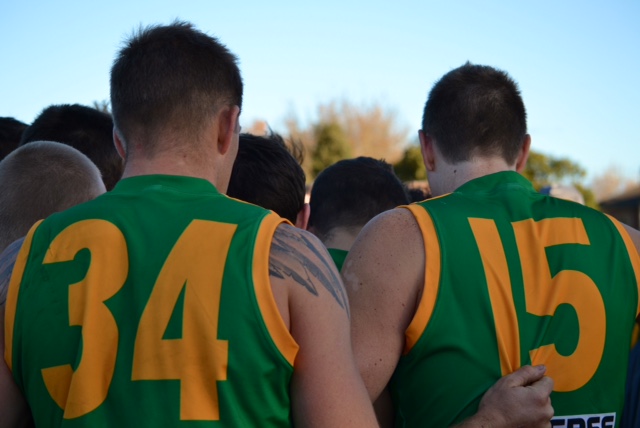 Three-quarter time at the local ground: sunshine, mud and poetry

Igo out into the huddle. Three-quarter time and Spotswood Football Club trail by 26 points. They’ve won the quarter – they kicked more goals – but Deer Park have held them at bay like a mediaeval fortress repels external threats. Deer Park stand tall and seemingly impregnable.

“It’s a big ask,” says the Spotswood coach to his band of muddy men. “But you can win this.”

I believe him. Spotswood have pace and skill. They are cunning and daring. They’ve had most of the ball for the most of the game. And yet…

The Spotswood players are breathing hard. Their huddle smells of liniment and sweat. There are raw and vivid scratches on the pale arms of several players.

Until you’re in the huddle, you forget how hard this game can be. One young man looks utterly spent; he stares at his feet throughout the break, sighing periodically.

I’m one of a dozen spectators who have left the fence when the siren rang to step across the heavy field and gather at the edges of this grand and ardent spectacle.

The Spotswood oval lies at the western end of Melbourne’s Westgate Bridge. Traffic hums in two directions along the Westgate Freeway, a ceaseless line of cars and trucks behind the north-end goals.

Throughout the day the sun appears from a sky weighed down by clouds to illuminate the oval in swathes of winter light.

A south-west wind comes and goes: it moves among the gum trees dotted here and there, then drops away and leaves the day as fine and clean as glass.

The Spotswood coach has addressed his men in a manner that is business-like. Now he calls them closer, one last time: “Thirty minutes, fellas. Give it everything.”

They do – but it isn’t enough. When it matters, Deer Park move like a fire-front, sweeping the ball in fierce, unbroken lines with a swift and sure efficiency. They win the game by 21 points.

The Spotswood team remain on the ground well after the final siren. The coach addresses them quietly. Then the players trudge off in the fading light as engines start up in the car park.