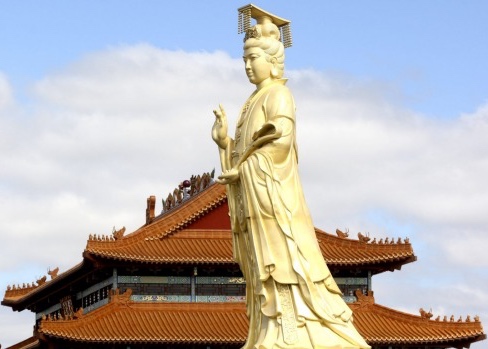 Down by the river

For those who travel by train from Melbourne’s city centre to the west, a passage across the Maribyrnong River is inevitable.

Between South Kensington and Footscray stations, trains pass over a bend in the river. High on the bridge, the world appears to fall away from beneath the train. Land gives way to water on both sides of the carriage and the view expands to take in light.

The effect is immediate; it feels like flying. Every time I cross the bridge, no matter what I’m reading, I look up and out.

Flemington Racecourse lies to the north, its grandstands fixed above the flatlands like some strange, impassive mountain range. To the south, in the distance, shipping cranes dot the sky.

Closer to the bridge, the river divides a cluster of industrial estates from a barren stretch of reclaimed land on which there rises the most improbable sight: a 16-metre statue of the Heavenly Queen.